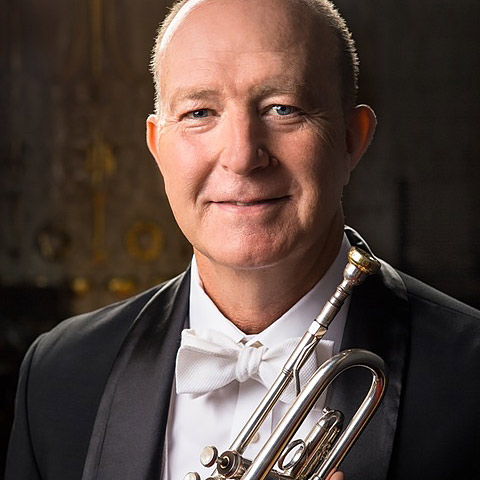 Active as a chamber musician, Neal is a member of the Pittsburgh Symphony Brass whose recordings, “BACH: THE ART OF FUGUE” (1998), “A CHRISTMAS CONCERT” (2000), “THE SPIRIT OF CHRISTMAS” (2003) and “A SONG OF CHRISTMAS” (2008) were described as “...Awhirl with color and rhythmic vitality – quite irresistible on every count.” by the Pittsburgh Post-Gazette. The recordings contain numerous arrangements by Neal Berntsen. Mr. Berntsen is also a founding member of the award-winning Asbury Brass Quintet, about which Fanfare magazine stated, “Not only expert but musical...undeniable virtuosity.” In June 2005 Mr. Berntsen toured Japan with members of the Chicago Symphony brass section with the Chicago Brass Soloists.?As a soloist, Mr. Berntsen has performed the Concerto in E flat by Haydn, Arutunian Concerto for Trumpet and Orchestra, Carmen Fantasy by Proto and Antonio Vivaldi Concerto for two trumpets in C Major with The Pittsburgh Symphony Orchestra. Other solo engagements have included the Milwaukee Symphony Orchestra and Bach’s Brandenburg Concerto No. 2 at the Sedona Chamber Music Festival in Sedona, Arizona. Mr. Berntsen’s performance of Copeland’s “Quiet City” was called a highlight of the 2005 season by the Pittsburgh Post Gazette. Mr. Berntsen’s solo recording TRUMPET VOICES was released in Nov. 2005. Andrew Druckenbrod, music critic of the Pittsburgh Post Gazette called the recording, “Electric”. While Mark Kanny of the Pittsburgh Tribune Review stated, “Trumpet Voices is an indispensable recording for anyone who appreciates great trumpet playing.”

In 2016 Mr. Berntsen was the soloist for the world premier performance and live recording of composer Reza Vali’s trumpet concerto, The Ancient Call, Calligraphy No. 13 for Microtonal trumpet and Orchestra (Albany Records). The Ancient Call uses the Persian Micro tonal scale. Mr. Berntsen performed the piece on a specially designed microtonal trumpet. Neal Berntsen was a finalist in both the Maurice André International Trumpet Competition in Paris, France and the Ellsworth Smith International Trumpet Competition. His wide ranging discography includes The Orchestras of Pittsburgh and Chicago, Manheim Steamroller, The American Girl Doll Christmas album and Michael Jackson.

As an educator, Mr. Berntsen is Chair of the Brass Division in the School of Music at Carnegie Mellon University. Additionally, he maintains a position as Artist in Residence at the Chicago College of Performing Arts at Roosevelt University in Chicago. He previously served on the faculties of Duquesne University and Valparaiso University in Indiana. He has been published in The Instrumentalist magazine, and the International Trumpet Guild Journal. Neal Berntsen was involved in the editing of Luis E. Loubriel’s book, “Back to Basics, The Teaching of Vincent Cichowicz” (Scholar Publications 2009) Mr. Berntsen’s collaboration with Michael Cichowicz has resulted in the release of the 2010 Vincent Cichowicz Long Tone Studies book. Mr. Berntsen has also written about the Cichowicz flow studies and recorded a number of those studies for Vincent Chicowicz Flow Studies Volume 1 &2 and appeared in a Youtube video discussing the Flow Studies. Mr. Berntsen has presented master classes and recitals around the world.

Mr. Berntsen is an active studio musician and was featured on an award winning national series of commercials during the broadcast of the Olympic games in Atlanta. His performance on “America” sung by Diana Ross opened the women’s final tennis match of the 2001 US OPEN in Flushing Meadows New York.