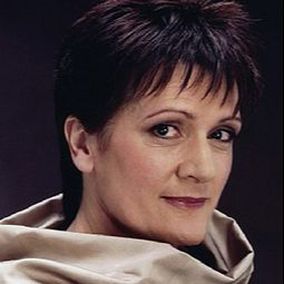 Ms. Byrne established herself firstly in the Italian repertoire, most notably as Tosca, as well as the title role in Manon Lescaut, Minnie in La Fanciulla del West, Leonora in Il Trovatore, the role of Amelia in both Un Ballo in Maschera and Simone Boccanegra, Aïda, Maddalena di Coigny in Andrea Chenier, Elena and Margarita in Boito’s Mefistofele and lesser known roles such as Asteria in Boito’s Nerone and the title role of Lucretia by Ottorino Respighi. Her first foray into the German repertoire was singing Gerhilde and 3rd. Norn  at Welsh National Opera. In the latter part of her performing career, Miss Byrne  excelled in many German roles such as the title role in Salome (Glimmerglass Opera) and Leonore in Fidelio. Her Wagnerian repertoire includes the roles of Sieglinde, Brünnhilde, Senta, Isolde, Ortrud, Gutrune, Gerhilde, Ortlinde and Fricka  Her Brünnhilde at the Edinburgh Festival earned her The Herald Award for outstanding performance as well as a Royal Philharmonic  Society award nomination. An excellent musician, she created the role of Blanca in the world premiere of James Macmillan’s Ines de Castro which was also broadcast on BBC-TV. and the role of The Stepdaughter in Hugo Weisgall’s Six Characters in Search of an Author recorded by New World Music.The Edinburgh Festival production of Siegfried was also filmed for the BBC and she has recorded the role of Respighi’s Lucretia on the Bongiovanni label.

Ms. Byrne received her musical education in her native UK. She graduated from The Birmingham School of Music and then continued her postgraduate studies at the Royal Northern College of Music in Manchester where she studied with Frederic Cox. She was invited to join The National Opera Studio which was the forerunner of the Jette Parker YAP at The Royal Opera House,Covent Garden where she worked with such luminaries as Tito Gobbi, Hans Hotter, Graziella Sciutti and Regina Resnik.  This was followed by a years study at The International Opera Studio in Zurich under the direction of Marc Belfort.

Ms. Byrne emigrated to the USA in 1989 after her marriage to her husband James, a native Chicagoan. She continued her vocal studies with the legendary teacher Margaret Harshaw until her death in 1997. Ms. Byrne was a member of the Voice Faculty at De Paul University School of Music from 2009-2017.