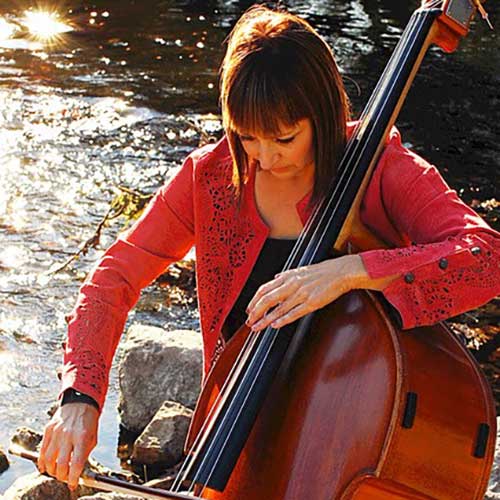 Rosenberg was featured on the recording of the Ed Thigpen Quartet entitled “Easy Flight.” Thigpen believes, “What makes Marlene special is her strength and depth of understanding of music. In a world of clones, she has managed to emerge as her own person with her own sound and feel… her time feel is steady and swings like mad.”

In Addition to her versatility as a bassist, Rosenberg has developed a keen interest and capability in the performance of ethnic music. She has performed and recorded with the Balkan Rhythm Band, which focuses on traditional music from Yugoslavia, Serbia and Greece. Her enthusiasm for the drumming and dance of West Africa has promoted study with master drummers from Ghana as well as participation in an African drumming group in Chicago.

Rosenberg has worked with numerous modern dance troupes, improvising on both bass and percussion. All this experience have added an extra dimension to Rosenberg’s Jazz work giving it a rare depth and range.

Committed to imparting her knowledge to others, Rosenberg currently teaches privately in the Chicago area. She has given special workshops in high schools throughout the Chicago area and has been a clinician at the Saskatchewan School of the Arts in Canada. She has been involved with the Ravinia Jazz Mentors program in the Chicago public high schools.Rosenberg has given workshops on creating melodic bass lines at the International Society of Bassists conference.She was Adjunct Professor at Northern Illinois for 13 years University (1994-2007),teaching Bass Studio and Jazz History (1 Semester). Rosenberg was a full time professor at Western Illinois University, in Macomb, IL for 3 years from 2007-2010 (Teaching Bass, World Music, Popular Music & Jazz Combos)and currently is music faculty teaching jazz combos at Northwestern University (2009-current),in Evanston,Illinois. She also is on the Music Faculty at Roosevelt University, in Chicago.She has been working with students at the Gallery 37 Program in Chicago, Sponsored by the Thelonius Monk Intitute in Washington D.C.

Rosenberg has recorded radio and television commercials for McDonald’s and Ameritech, among others.

Rosenberg made her debut as a leader and composer on her compact disc “Waimea” (Bassline). Her latest CD “Pieces Of…”(Bassline) presents her as arranger as well as composer. PIECES OF… features pianist Cedar Walton and saxophonist Javon Jackson. Currently, (2011) she is a recipient of an Illinois Arts Council Grant which will help to complete her 3rd self Produced CD.