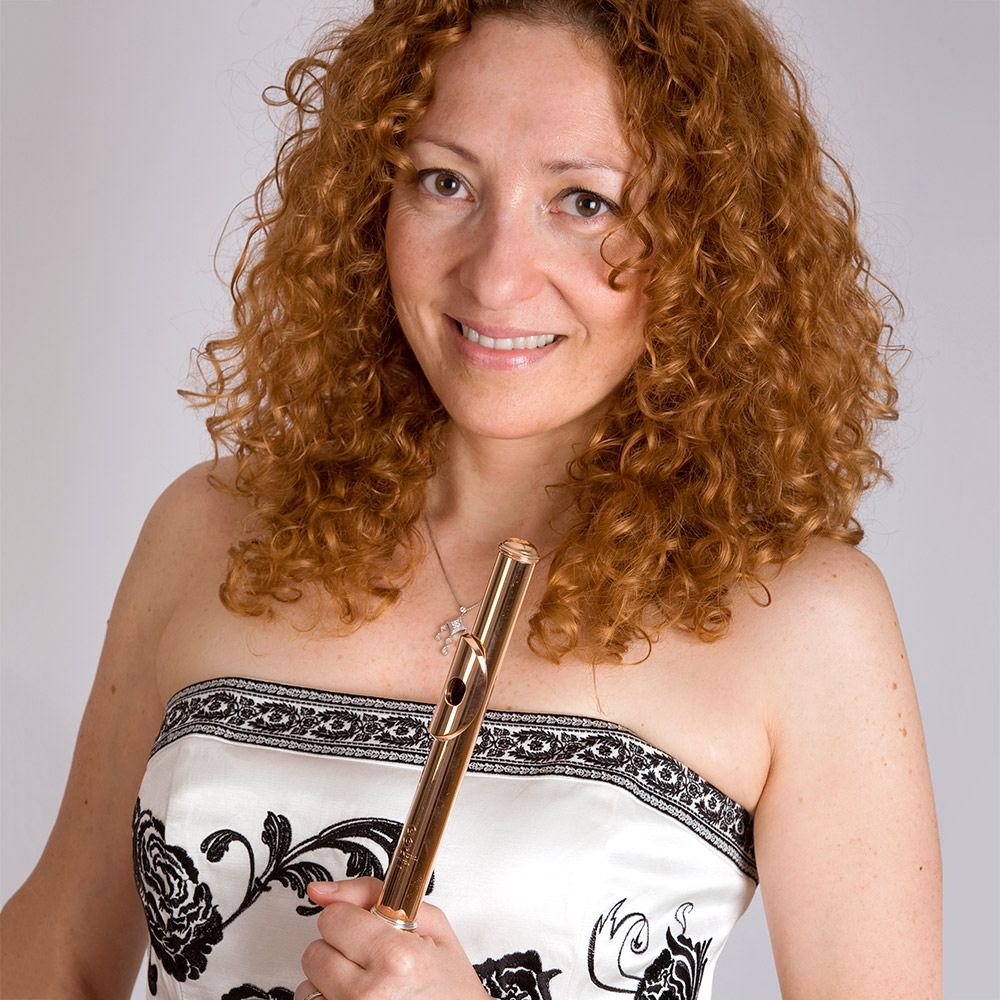 Eugenia Moliner has been acclaimed by Flute (The British Flute Society Magazine) as “An artist of the highest caliber...”
“Ms. Moliner is an excellent, exciting and imaginative flute player, totally in control of the sometimes ferocious technical demands of the scores”.

And by Flute Talk Magazine, USA “Moliner is a fantastic flutist, every note she plays is part of the story. She weaves a line with colors, vibrato use or the lack thereof, and a sensuality that is exactly what the music requires…. it is a master class in musicality….”

Her many recordings as well as her live performances have also received rave reviews from American Record guide; Fanfare, Chicago Sun Times, Chicago tribune, Fort Worth Star Telegram, Gramophone, The New Yorker, and other specialized magazines.

As a soloist with orchestra she has appeared with the Chicago Sinfonietta, Daejeon Philharmonic, Camerata Serbica, Sarajevo Philharmonic, Monterrey symphony and Traverse Symphony.

Ms. Moliner has also performed chamber music with Mathieu Dufour, as well as with other musicians from the Chicago Symphony orchestra, Rotterdam Philharmonic and Toronto Symphony, the Chicago Chamber Musicians and the Civitas Ensemble.  She has appeared in recital with pianist Rob Broek, the New Opus Trio, the Aspen Trio, the Avalon String Quartet, and with the sopranos Patrice Michaels and Michelle Areizaga. While living in Holland she collaborated with numerous ensembles like the Rotterdam Baroque Ensemble and the National Philharmonic of the Netherlands.

Her live performances have been broadcasted in several classical radio stations in US and abroad; WFMT, NPR and Radio Nacional de Espana. She has also appeared on TV programs in Spain, Bosnia, the Netherlands and Taiwan.
Moliner’s discography includes 9 CD recordings, with international record labels such as Cedille, Bridge (USA), Orobroy and Opera Tres (Spain) and Neos (Germany).

With her Cavatina Duo as well as a soloist, Eugenia has been the subject of interviews in international magazines such as:  Chamber Music America, “Flute” the British society Magazine (UK), Classical Guitar (UK), Guitarra Magazine (web), TodoFlauta, (Spain), Soundboard (USA), FluteTalk (USA) and Ritmo, (Spain) . Her Duo is the first of its kind to be featured on the cover of 3 music magazines, Classical Guitar Magazine (UK), FluteTalk Magazine (USA) and Ritmo (Spain).

Composers from around the world have written and dedicated new works to her Cavatina duo. They have premiered more than 30 works by Sérgio Assad and Clarice Assad (Brazil); Carlos Rivera, Michael Karmon; Alan Thomas (UK-US), David Leisner (US) Alejandro Yagüe (Spain); Atanas Ourkouzounov,(Bulgaria/France),Boris Gaquere (Belgium) and V. Ivanovic (Bosnia/Greece), and many others. The Duo received the Encore Prize in 2003 for their collaboration with Michael Karmon.

Eugenia Moliner has given Master classes throughout the United States, in Universities and Flute Clubs, as well as in Festivals and Schools in Spain, Brazil, Taiwan, Mexico, Bosnia, Serbia, India, Holland, Portugal and Denmark.

While studying in the Netherlands, Ms. Moliner won the Young Musicians of De Doelen prize, and was awarded two times the highest scholarship given by the culture ministry of Spain.

Mrs. Moliner is an Artist- Faculty at the Chicago College of Performing Arts at Roosevelt University where she has been teaching flute and Chamber Music since 2009. She also serves as a teaching associate in Flute at the University of Illinois at Chicago.

Ms. Moliner started her music education at age 15, studying at the Conservatorio Superior de Musica Joaquin Rodrigo in Valencia (Spain). Later she studied at the Rotterdam’s Conservatorium CODARTS, (Netherlands), where she obtained degrees on Solo performance and Chamber Music. She also studied privately in Antwerp, Belgium.

Eugenia Moliner plays with a Brannen- Cooper 14K flute with a 18K Lafin head joint as well as a Muramatsu alto flute. She lives  in River Forest,IL with her husband Denis and their son Alex. She speaks 5 languages and her hobbies include learning about astrophysics and painting watercolors.