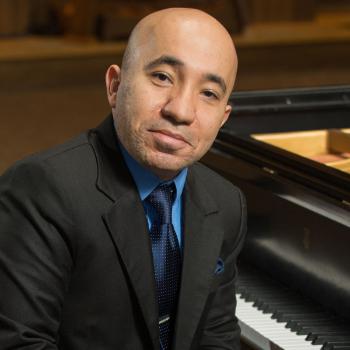 Dr. Wael Farouk has performed on five continents in such venues as the White Hall in St. Petersburg, Schumann's house in Leipzig, and Weill Recital Hall at Carnegie Hall in New York, where his solo debut performance in 2013 was described as "absolutely masterful."

Praised as a “formidable and magnificent pianist” by the New York Concert Review, Dr. Farouk is known for his groundbreaking performance projects. In the spring of 2021, he gave a performance of Rachmaninoff’s concerti Nos. 1, 2, and 3 in a single evening with the New Philharmonic Orchestra and Conductor Kirk Muspratt, which the Chicago Tribune music critic described as a “history-making concert.” The entirety of the performance was also broadcast on WFMT, Chicago’s Classical Music station.

Since 2014, Dr. Farouk has performed 30 different recital programs featuring the complete solo piano works of Rachmaninoff and Brahms, as well as Brahms’s complete piano chamber music. Other programs included works by Chopin, Stravinsky, Tchaikovsky, Debussy, Ravel, Bolcom, Busoni, and Godowsky; the complete Transcendental Etudes by Liszt; and Bach’s The Art of Fugue and Beethoven’s Hammerklavier. He has also performed the complete piano concertos of Rachmaninoff, Brahms, and Beethoven (including all five Beethoven concertos in a single concert). In 2017, he gave the African premiere of the monumental Busoni piano concerto with the Cairo Symphony Orchestra.

Dr. Farouk commands a vast repertoire of more than 70 concertos and 60 solo programs, spanning from Scarlatti to Bolcom and including the complete piano works of J.S. Bach, Beethoven, Brahms, Chopin, and Rachmaninoff as well as the complete sonatas of Prokofiev, Scriabin, and Schubert. He has appeared as a soloist with such orchestras as the North Czech Philharmonic Orchestra, the Saint-Etienne National Orchestra, the Academy of the Arts Orchestra, the Manhattan Symphony, and the Cairo Symphony Orchestra, led by Christoph Mueller, Steven Lloyd, Patrick Fournilier, and Philippe Entremont, among others.

Dr. Farouk is on the piano faculty at the Chicago College of Performing Arts at Roosevelt University in Chicago since 2012.

Dr. Farouk received his Bachelor of Music degree at the Cairo Conservatory as a student of Samir Aziz, Edgar Davelienadze, and Vselod Demidov, then came to the United States on a Fulbright Fellowship to study with Marilyn Neeley at the Catholic University of America. After receiving a Master of Music degree from Converse College as a student of Douglas Weeks, he continued his studies with Solomon Mikowsky at the Manhattan School of Music and the Chicago College of Performing Arts. He completed his studies with Daniel Epstein, receiving a DMA degree from Rutgers University.